Do you purchase or sell goods online?  If so this clip from Channel 4’s recent Dispatches programme may make you rather angry.

As someone who has worked in and around mail order for sometime I’ve always joked that packages sometimes look like they’ve been kicked to their destination. Obviously its a mindless few who tarnish these companies reputations but its pretty depressing to see goods being treated this way.

They are not perfect angels themselves, but the news that the Royal Mail is to be sold is also depressing. Customer service is likely to be a very busy role to be in come 2014. 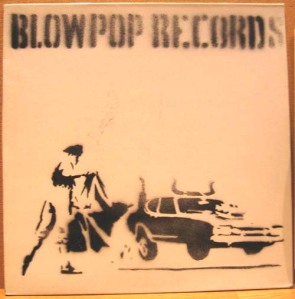 After two previous attempts to sell it on www.ebay.co.uk my hand stencilled copy of the Capoeira Twins ‘4×3’ 12″ record sleeve finally sold the other week for £410 to a buyer in Sweden. I didn’t really want to sell it but as a result Mr Natwest might be a bit more happier now that I did.

I was originally sent this back in 1999 by the Bristol based press and promotions company, Timebomb. I think I was more impressed by the tune at the time and subsquently gave it a good review for the magazine, ‘Level’ that me and Daniel King wrote for under the name The Consultants. At the time I was also starting to DJ around the capital and it probably got a couple of spins at the Bloodshot Mafia night that me and a few others were involved with (all too briefly) at Fluid down there on Charterhouse Street.

Then after numerous flat moves the record ended up sitting in a Big Yellow Storage room until last autumn when I decided that it was time to try and sell it. A bit of internet investigation proved my memory right and via the forums at http://www.banksy.info it was confirmed by the Capoeira Twins themselves that it was done by Banksy.

Hi! Its 2008…a year since any last activity! The aim is to try a little harder this year. In the meantime heres a picture of the sunset from Brighton Pier last month.